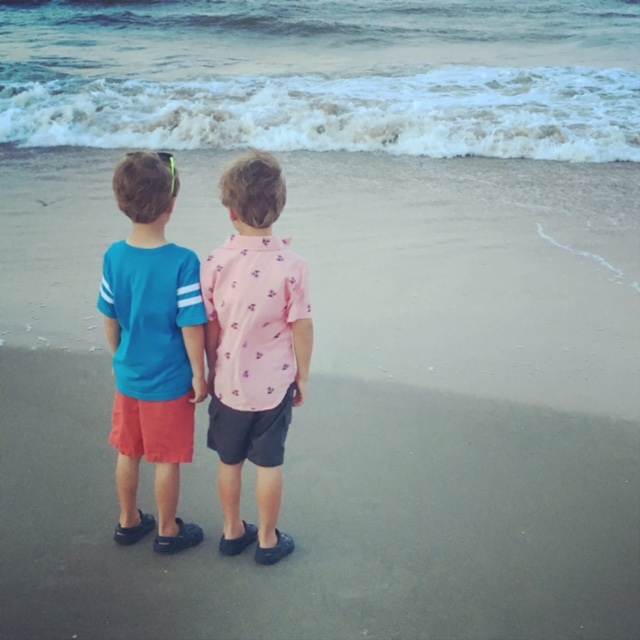 When I started this blog back in January, I had all of these grand plans of posting consistently and obviously that didn’t happen, because, life… But, I want to do better and share more. It’s therapeutic, in a way, to share life’s stories with others and know that we’re all going through pretty much the same thing. Motherhood can be hard, y’all, so let’s go through this together.

I’ve been struggling a bit lately since my sweet J + O turned five back in June. I know it’s cliche, but all I can think about is where has the time gone? It just went by so fast. I honestly can barely remember what they were like as babies, or even a time before the topics of pee and poop monopolized the conversation in this house. They just look so…big. Their faces that were once so round and chunky are now thinning out. They have the longest arms and legs and have already outgrown shirts from earlier in the spring. There’s also a change in the way they talk too. They’re developing a fantastic sense of humor, which brings me so much joy. I was lucky to be raised in a house with lots of laughter and even some practical jokes here and there, so I’m so happy to see them start to pick up on that. Laughter is so important and seeing and hearing them learn new things reminds me again of what it’s like to be a little kid.

All of these things make me so happy yet sometimes it feels so unfamiliar and even sometimes a little sad. On vacation a couple of weeks ago, I spent time on the beach with just Jack. I watched him quietly as he stood for the longest time, just staring into the ocean. The sun was starting to set and it cast the perfect shadow of a smaller version of him. This struck me in a weird way because it seemed to capture how I’ve been feeling. Here I have these boys that will be starting kindergarten in just a few weeks, but I still see them as my little boys. I’m not quite ready for them to grow up just yet.

It seems that we’re all a little stuck somewhere in the middle. There are still nights when they will say, “Momma, will you lay with me?” or “Will you rock me?” And you know what? A lot of times I say yes. Even when I’m exhausted and even when I have a super long to-do list, I say yes. They climb up into my lap and barely even fit and I rock them for just a few minutes. It seems like that’s all they need and then they can relax and fall asleep. I know that soon they will probably stop asking, so I try to soak it in as much as I can for now and hope and pray that the next five years pass a lot more slowly.